Impact of Hurricane Maria on US Metropolitan Areas

Rain and strong winds from Hurricane Irma battered the island of Puerto Rico on September 6, 2017. Then on September 20, 2017, a deadly Category 5 Hurricane Maria struck Puerto Rico, devastating the island, and plunging all of its 3.4 million residents into a desperate humanitarian crisis.

On September 29, 2017, EurekaFacts statisticians and researchers looked at the potential impact of these two hurricanes on Puerto Ricans becoming climate refugees in US metropolitan areas.

Climate refugees from Puerto Rico in US metropolitan areas

➢ Immigrants tend to resettle to places where they have families or friends, or where there is a strong presence of diaspora of their place of origin they can rely on to start their new life.

➢ We identified US metropolitan areas in the mainland, with the highest presence of Puerto Ricans as areas who will experience that new waves of climate refugees from Puerto Rico.

➢ The primary metropolitan areas have more than 50,000 Hispanics of Puerto Rican origin and are expected to receive the most influx of Puerto Ricans.

➢ The metropolitan areas identified as secondary have between 10,000 and 50,000 Hispanics of Puerto Rican origin. 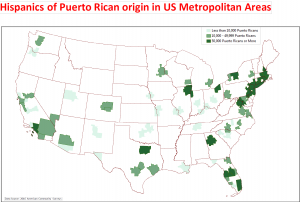 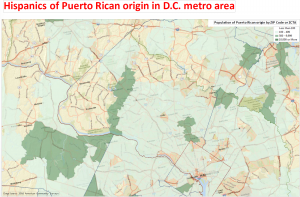 Primary metropolitan Areas that will be impacted

Secondary metropolitan Areas that will be impacted

This report was prepared on September 29, 2017, in compliance with ISO 20252 international quality standard for market, public opinion, and social research. Segmentos™ and the data aggregation contained in constitute intellectual property of EurekaFacts. The report relies on several data sources and analytical techniques deemed by EurekaFacts to be sound and compliant with best practices but the company provides the information ‘as is’ with no express or implied claims or guarantees. Segmentos™ is a service mark of EurekaFacts LLC.

We’ve got you covered. If you need quick answers and expert advice now, let us know you’re ready to get started. We’re prepared to help you understand climate refugees every step of the way.