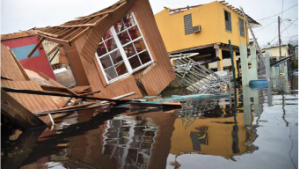 ROCKVILLE, MD, October 1, 2017 – Twenty major metropolitan areas with 50,000 or more Hispanics of Puerto Rican origin (view the full list) will likely absorb the influx of climate refugees from the island. These cities will need to prepare for new residents who have full US citizenship but several unique characteristics that differentiate them from the general US population and other Hispanics. Examining the likely impact of Hurricane Maria on internal migrations, the research firm EurekaFacts identified the key cities likely to receive an influx of new residents.

Cities, including New York City, Orlando, Philadelphia, Miami, and even Cleveland, will likely start seeing new residents arrive just as quickly as transportation infrastructure is restored. In addition to the 20 large jurisdictions, there are 30 other locales such as Buffalo, Phoenix, and Charlotte, with 10,000-50,000 people who identify as Puerto Rican.

The devastation in infrastructure in Puerto Rico has resulted in a loss of inhabitable dwellings, places of employment , and community resources such as schools, hospitals, the power grid, and other essential services. While Puerto Ricans are resilient people, the magnitude is such that even small fractions of the 3.4 million population are expected to seek refuge near relatives and friends in mainland US. Cities need to prepare to receive these new residents. “Displaced from their homes, they will need support in housing, health, employment, in learning their new community, enrollment in schools and in accessing a variety of social services,” says Jorge Restrepo, CEO and Principal Analyst at EurekaFacts.

Proactive receiving cities will need to examine their programs to meet the new need  since most new resident programs are designed to welcome foreign refugees and not and not to welcome and integrate internally displaced citizens.

EurekaFacts compiled these demographics along with the list of 20 primary and 30 secondary cities using its proprietary Segmentos geo-demographic tool. The tool enables organizations to discover and focus on their target audience and integrate detailed profiles of the Hispanic population into their data sets.